This work was created in the last few weeks. 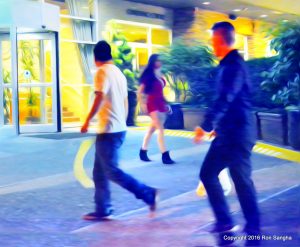 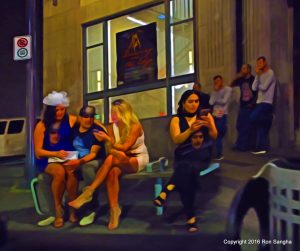 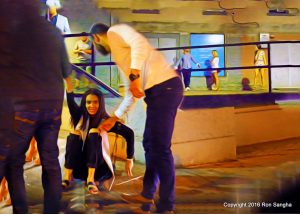 It was Sunday Oct 9th on Canadian Thanksgiving Day and I was standing beside the beautiful Carnegie Library in the back alley of what’s considered to be one of Vancouver’s or the world’s most drug infested areas. I had a ride with my family to serve free food from Guru Nanak Free Kitchen. Lunch has been served every Sunday around 12:30 to 2 o’clock for many years. All the food is donated by a Sikh temple lovingly prepared early that morning. No religion or lectures are given, the food is given in the spirt of ( seva) service, kindness and love for our fellow human. We were lucky enough to be able to serve perhaps three to four hundred people. I watched a young elementary school girl serve rice pudding to many older men that perhaps lived a very hard and difficult life. When she served the food, their faces just warmed up in a nice smile and human kindness showed itself. I was lucky to observe this and the encouraging kind words they would often share. As I stood there beside the beautiful Carnegie library, I thought of the man that over 115 years ago donated the money to build this Library. A man called Andrew Carnegie that had never visited Vancouver, but through his philanthropy was able to make a significant contribution that has lasted more than just about any other Vancouver building and been of great use to the East side community.
Here is some information about the library and the man that made it possible.
“On March 25th, 1901 Vancouver requested and was granted $50,000 from US steel magnate and philanthropist Andrew Carnegie to build a library. Carnegie agreed to give the funds only if the city furnished a site and agreed to spend $5,000 a year. The city council accepted the Carnegie gift and its conditions. Built in 1903, it was indeed the first public library in Vancouver. In 1957 the library moved on to a bigger location and it became the home of the Vancouver Museum for ten years. In 1967 the museum moved out and the building lay vacant. “Following a massive campaign spearheaded by the Downtown Eastside Residents’ Association City Council agreed to save the building and convert it to a community Centre. Carnegie Community Centre opened its doors to the public on January 20, 1980.
I then got an inspirational email about Andrew Carnegie and I am sharing it below.
“Mental attitude represents the sum total of one’s emotional feelings at any given time, and it may be controlled by self-discipline. Thus, the individual has the choice of expressing either his negative emotions or his positive emotions. Mental attitude is controlled by established habits based upon definite motives, and those habits may represent the highest type of organized thinking.
“The story of all human progress boils itself down to just that. You might state the case clearly by saying that all human achievement begins in thought but ends in work! And work becomes a pleasure or a hardship, according to the nature of the motive which inspires it and the mental attitude in which it is performed.
“Therefore, it is important that a man build his definite major purpose on as many of the ten basic motives as possible, in order that his purpose may become obsessional and thus easily and pleasantly pursued through action.”
Here we have quoted the views of one of the greatest industrialists the United States has ever produced. He was not only a great industrialist, but a philosopher, an able psychologist, distinguished throughout the world as a man who had a keen insight into the character of men. He was also a great philanthropist. He provided that the major portion of his material riches be given back to the people of America in ways designed to profit the greatest number. The Carnegie libraries, for example, are a result of this philanthropy. A total of 2,509 Carnegie libraries were built between 1883 and 1929, including some belonging to public and university library systems.
My favorite thought from the last week is “It is the ego and judgement that makes me angry or sad. It is my choice of love and kindness that makes me happy and enthusiastic.”
More info on the Carnegie Library.